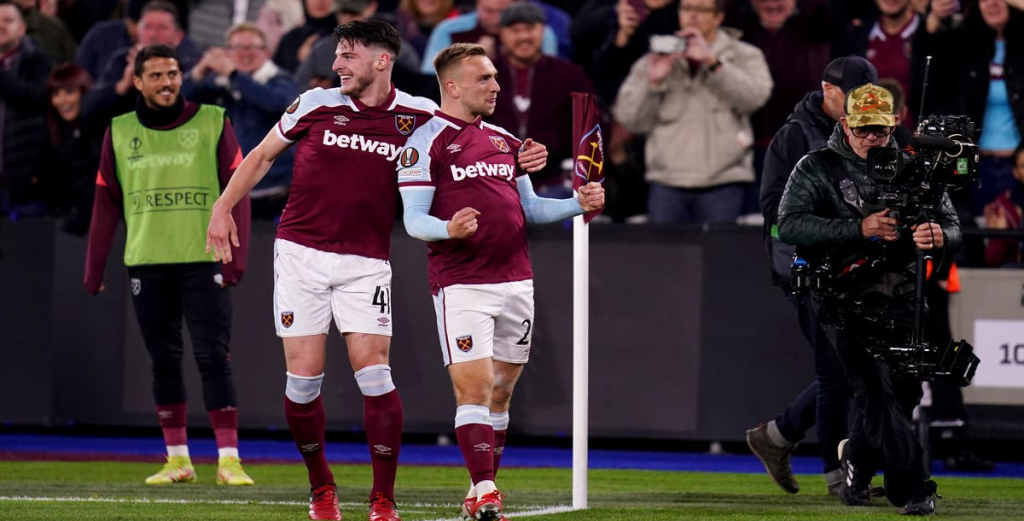 We hope you won big on the Champions League with our predictions and tips on Tuesday and Wednesday. Today’s betting action turns to the Europa League. Thursday sees Premier League high fliers West Ham in action, along with Leicester, Leverkusen, Frankfurt, Napoli, Lazio and Rapid Vienna. Here is our Europa League betting guide with professional predictions and tips.

Claim a big bonus from one of our partner operators and use their money to bet on the Europa League. Remember to sign up to our free newsletter with winning tips to bet on the Premier League, Bundesglia, La Liga, Brazilian Serie A as well as the Champions League and Europa League.

It’s been a disappointing period for Genk but West Ham again showed their class at the weekend beating Aston Villa.

The Hammers dominate Group 6 while Genk have made little impression.

Gold’s Europa League tip: in so far as anything is certain in football, the away win looks attractively priced

Napoli are top of Italy’s Serie A and won again yesterday. The team from Warsaw have been really poor. The reverse tie saw Napoli stroll to the win by three goals. Other than a 3-2 home defeat to Spartak Moscow in the Europa League, Napoli have been excellent in domestic and international competition.

BetGold Europa League tip: you won’t get rich at those odds but it would be a real shock or Napoli not to win

This solid Bundesliga team claimed the points comfortably in the reverse – they also beat Antwerp away.
They sit atop Group D of the Europa League.

The uncertainty has been Frankfurt’s recent form. After always drawing they pulled off a spectacular Bundesliga win over Bayern Munich

However, after being steady draw specialists Frankfurt have grown less predictable, beating Bayern (incredible) but also losing to Bochum in the Bundesliga. Their draw against RB Leipzig in the Bundesliga at the weekend was more typical.
Home win odds: 2.5
Draw odds: 3.7
Away win odds: 2.75

Leverkusen are struggling on a five match sequence without a win, including a 2-0 home defeat to Wolfsburg who had been on ever worse form. Before that Leverkusen had won 8 in 10. Leverkusen shared the points away to Real Betis and should be too good, but their poor form makes this tricky.

At least striker Schick will be back after a one-match ban but others are missing.
Home win odds: 1.93
Draw odds: 3.94
Away win odds: 4

BetGold Europa League tip: We think Leverkusen should still win but don’t bet big as their form is not encouraging

For some reason operators don’t see the Austrians as having much chance.

The club are neck and neck in the Europa League, while Rapid won the reverse fixture at home.

BetGold Europa League tip: There looks to be some value in Rapid. We quite like Rapid at odds of 3.6 draw no bet, or with a handicap of +1.5 goals at Europa League odds of 1.38.

Spartak lost 7-1 to Zenit St Petersburg and were then held at home. This followed Leicester’s 4-3 away triumph against Spartak.

Leicester lost against Arsenal at the weekend despite a strong second half display but had been playing well prior to that.

Monaco to beat PSV at home at 2.2 odds might be worth a flutter.

Betting Bonuses for the Europa League

Claim a welcome bonuses from a bookie listed on BetGold then take the professional predictions and tips from our Betting Guide to claim a bonus and bet bold on the Europa League.

All odds subject to change.

Sign up to our newsletter for Gold’s great free betting guides!