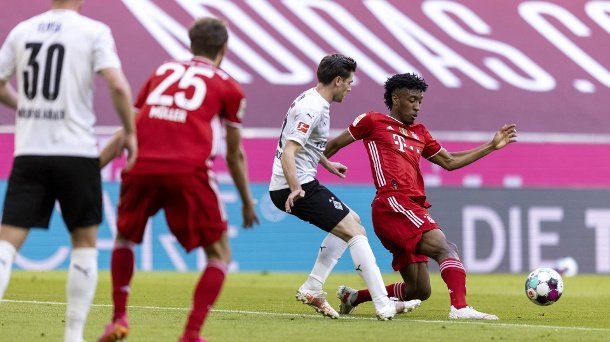 After a few significant results in the previous round of matches which might prove to be decisive in the title-race, the excitement resumes in the 2021/22 Bundesliga campaign as it heads into Matchday 22 this weekend.
By taking its tally to 52 points, Bayern München has re-established a 9-point lead on 2nd placed Borussia Dortmund at the top of the league-table and Bayer Leverkusen is only 5 points back in 3rd position. Union Berlin stays in 4th spot for now with 34 points while Freiburg and Köln lie close behind to make up the rest of the top-6.
At the opposite end of the standings, Augsburg, Stuttgart and Greuther Fürth are still the 3 sides lying in the relegation-spots although Arminia Bielefeld, Borussia M’gladbach and Hertha Berlin are all in imminent danger of slipping into the drop-zone.

Despite a gutsy display away to the champions, Leipzig fell to its 2nd loss under the new manager which put them back to 7th position. Meanwhile, Köln snatched a vital victory at home to move up to 6th spot once again.
For our Bundesliga betting-experts, sticking with the home-team at 2.65 in the Match Result & Both Teams to Score market is the best pick. Leipzig has 8 wins from its 11 matches at Red Bull Arena but has only 1 clean-sheet in the last 7 home-games. Köln is unbeaten in its past 5 away-games but all against teams in the bottom-half and has no clean-sheets on the road so far.
The 1.85 line on Both Teams to Score & Over 2.5 Total Goals gives a pretty secure option in this clash. With more than half the season already passed, Leipzig has the 3rd best scoring-record on home-turf and is averaging nearly 3 goals per game at present. Köln should open its tally as well having scored 10 times in its previous 5 away-matches in the Bundesliga.
Bundesliga Extra Betting Tips
Both Teams to Score in 1st Half: Yes at 3.64 on Zodiac Bet
2nd Half Correct Score: Leipzig 2-0 Köln at 6.25 on Zodiac Bet
Prediction
Leipzig 3-1 Köln at 11.0 on Zodiac Bet

Over the past two months, Bochum has been in quite poor form which puts the club just 3 points above the drop-zone despite being in 11th spot. Bayern has taken 8 wins from the last 10 matches to open a 9-point lead at the top.
Our Bundesliga betting-team would suggest the 2.25 price on the away-side to Win Both Halves. While Bochum has a pretty decent home-record for the season containing only 2 defeats, it has only earned 1 win from its previous 4 league-matches at Ruhrstadion. Besides Bayern has 8 wins from its last 10 away-games in the Bundesliga, scoring at least 3 goals in each victory.
The 1.88 line on Bayern & No for the 1st Half Result & Both Teams to Score market also provides a good bet at shorter odds. Bochum has managed to score a goal during the opening-period in just 4 of its 10 home-games this season. On the other hand, Bayern has conceded a mere 11 goals on the road and has opened its account during the 1st half in all 10 away-games.
Bundesliga Extra Betting Tips
Winning Margin: Bayern 3 Goals at 4.80 on Zodiac Bet
Own Goal: Yes at 7.75 on Zodiac Bet
Prediction
Bochum 0-3 Bayern at 9.00 on Zodiac Bet

Freiburg has managed to cling on to 5th spot for at least one more week despite taking just 2 wins from the past 7 games. Mainz has not had much consistency of late which keeps it outside the top-half in 10th position.
Favouring the home-team at odds of 2.10 for the Match Result will be the recommendation of our Bundesliga betting-team for this fixture. Although Freiburg does not look in the best shape at the moment, it has still taken 7 points out of the last 3 home-games. Mainz has been dreadful on the road with 8 defeats in 10 away-matches and an ongoing 5-match losing-run.
The 1.75 line on Both Teams to Score makes a fairly safe bet which offers a pretty good return as well. While Freiburg is well-known to be a defensive-minded team, it has only managed to earn 2 clean-sheets from its 10 home-games. Moreover, Mainz has failed to open its account in only 1 of its past 7 away-matches despite being in terrible form on the road.
Bundesliga Extra Betting Tips
Half Time/Full Time: Freiburg/Freiburg at 3.50 on Zodiac Bet
2nd Half Result & Both Teams to Score: Draw & Yes at 6.00 on Zodiac Bet
Prediction
Freiburg 2-1 Mainz at 9.00 on Zodiac Bet

This is a pivotal encounter in the relegation-fight for both teams. M’gladbach is presently only a single point above the drop-zone and Augsburg might be able to leapfrog them out of the bottom-3 by grabbing the victory here.
To our Bundesliga betting-team, the 2.20 offer on the Double Chance for a draw or away-win is the standout pick. M’Gladbach is the huge favourite but it has only taken 5 points in the previous 9 matches with a 4-match losing-streak at home. Augsburg has got 9 points from its last 7 matches and has also improved on the road despite losing the last 2 away-games.
For a safer bet offering shorter returns, the 1.70 price on Both Teams to Score throws a pretty good option. Borussia M’Gladbach has failed to open its tally in only 1 of its 10 home-games but has let in 13 goals in the last 4 matches at Borussia-Park. Augsburg is conceding almost 2 goals per game on the road, but has failed to score only once in the last 8 away-matches.
Bundesliga Extra Betting Tips
Away-Team Total Goals: Over 1.5 at 3.08 on Zodiac Bet
Result & Both Teams to Score: Draw & Yes at 5.00 on Zodiac Bet
Prediction
Borussia M’Gladbach 2-2 Augsburg at 15.0 on Zodiac Bet

Union Berlin stays in 4th spot to keep its top-4 hopes well and truly alive despite going down to a defeat last weekend. Borussia Dortmund suffered a more damaging defeat which has widened the deficit at the top to 9 points.
The suggestion of our Bundesliga betting-team for this fixture will be to take the 2.33 line on Over 1.5 Goals for the home-side. Union has a pretty solid scoring record having netted at least 2 goals in 6 of its 10 home-games this season. At the same time, Dortmund is yet to get a clean-sheet on the road while it has given away 9 goals in the last 3 away-games.
Moreover, the 1.80 line on the Double Chance for a home-win or draw looks a decent pun for this encounter. Thus far, Union Berlin has taken 6 wins from 10 home-games in the Bundesliga with only a lone defeat to the champions. Dortmund has only won half of its 10 away-games with its 4 defeats on the road proving to be a costly deficiency in the title-race.
Bundesliga Extra Betting Tips
Half Time Result: Union Berlin at 3.50 on Zodiac Bet
2nd Half Both Teams to Score & Total: Yes & Under 2.5 at 6.50 on Zodiac Bet
Prediction
Union 2-1 Borussia Dortmund at 13.0 on Zodiac Bet