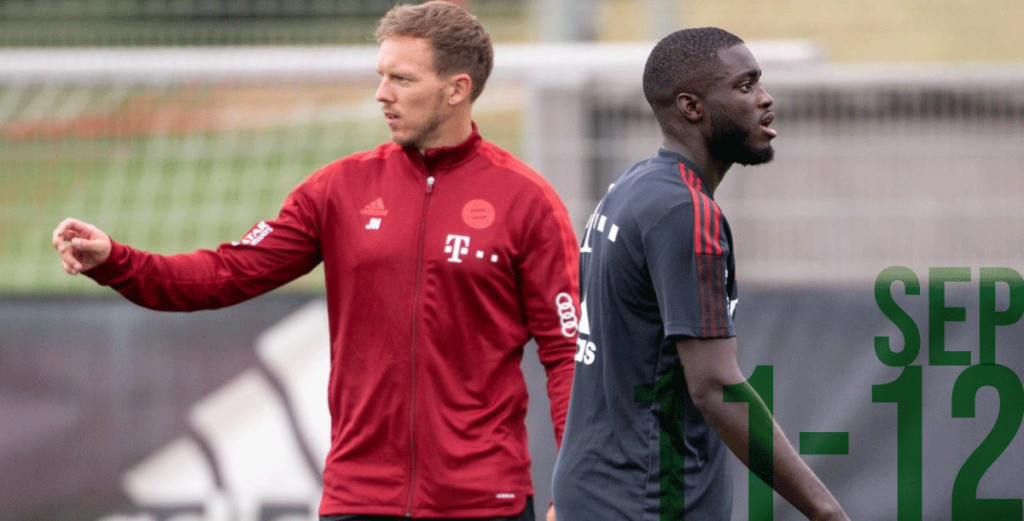 Following the chaos of the abandoned Brazil v Argentina showdown and the rest of the World Cup Qualifiers across Europe, attention shifts to domestic leagues. Here we take a look at the 1. Bundesliga 21/22 matchday 4 which promises some top level matches and some great betting opportunities.

Below we give you Bundesliga news, odds, predictions and tips. Also on BetGold please check out our ever growing list of BetGold approved betting partners – carefully selected by us to help you grab a big welcome bonus from only reliable and safe bookmakers. With our Bundesliga tips and bonus offers you have everything you need for a great weekend.

People accuse RB Leipzig of many things, including having no footballing tradition.
But one thing nobody can accuse them of is being inactive in the transfer market as they look to prevent Bayern Munich winning their tenth Bundesliga title in a row: over €100m spent, but also over €100m earned from player sales with enough churn to field pretty much a new team.

This contest – last season’s Bundesliga Champions travelling to the runners up – will indicate whether RB Leipzig are contenders or whether, as we suspect, they are a team in transition.

Julian Nagelsmann Will Be Facing RB Leipzig This Time

That transfer action included a number of deals between the two teams, including head coach of Leipzig Julian Nagelsmann becoming the boss in Munich.

Leipzig’s new coach Jesse Marsch has seen an uneven start to the Bundesliga season with his team sitting in 10th in the league. They looked great scoring four goals against Stuttgart but either side of that performance was a really poor season-opening defeat to Mainz, and then defeat to early league-toppers Wolfsburg, who are themselves still around 50-1 for the title – showing how Bayern Munich to win the Bundesliga is hard-wired into the Bundesliga betting price.

The positive for Leipzig is they are at home – they are terrible away, defeated in their last five.
Bayern didn’t impress as they shared the points on the first day but they are starting to look their powerful best after managing 8 goals in their last 180 minutes of football, leaving poor Cologne and Hertha Berlin wondering what had hit them.

Leipzig’s only victory over Bayern was in the 2017/8 season although there have only been 10 meetings. Bayern won this fixture last season (narrowly) while the previous four ended drawn.

Leipzig will need to find a way past Bayern’s goalkeeping virtuoso Manuel Neuer while at the other end will need to try to stop Robert Lewandowski from scoring for us (five goals in three matches this season, as he aims to emulate or even better last season’s incredible 41 goals scored in just 29 games).

Another small piece of comfort for Leipzig, though: Lewandowski clearly finds Leipzig one of the few clubs that is hard to score against, netting just one in six against Die Rotten Bullen.

BetGold Bundesliga Betting tip: we are betting on Bayern Munich in this through Merkur odds of 2.05.

We can just about call this a top of the table clash as 2nd placed Bayer04 Leverkusen host 5th placed Borussia Dortmund, many people’s favourites to win the Bundesliga if you take Bayern out of the equation.

National coach Hansi Flick called Wirtz the “total package” after his international debut in German’s 2-0 World Cup Qualifier win over Liechtenstein, while England colleague Jordan Henderson said Dortmund’s Bellingham was “miles better” than he was at Bellingham’s age. This followed Bellingham’s performance as England cruised past Andorra 4-0 in their World Cup qualifier.

Also showcased in this one will be Erling Haaland, in good form even by his standards. He bagged three for Norway against Gibraltar, with 12 goals in his last 15, and six in five for Dortmund this season. Frighteningly for Leverkusen, Haaland says he needs to score more goals.

But Leverkusen are in good form having gained seven points from three games.
We are not overly confident but the odds are just too tempting for two relatively well matched teams with Leverkusen enjoying home advantage, possibly evening up this encounter.

FC Freiburg v FC Köln is another near top of the table clash, with 4th playing host to 6th. This represents a good start for these two.

The home team is firm favourite at Bundesliga odds of 2.15 while Cologne are back on 3.18 for the away win, reflecting their generally poor away form.

BetGold Bundesliga Betting Tip: A home win probably is the most likely outcome but the draw is at least worth considering at 3.70.

Top-placed Wolfsburg will surely have too much for newly promoted Greuther Fuerth but at odds of 1.61 for an away team we are not tempted.

But Wolfsburg’s success has been based on their defence with only four goals scored so do check out the under 2.5 goals market.

Top Bundesliga Tip For The Weekend

To us from a betting perspective perhaps the most intriguing Bundesliga match of the weekend is Borussia Mönchengladbach v Arminia Bielefeld.

Sure, it doesn’t sound like a massively sexy encounter but just look at the odds and the form.

These are the odds from Merkur:

In other words, Mönchengladbach are overwhelming favourites and the bookies don’t give a hope to Bielefeld to win, or even to draw. And you can see why: Bielefeld are one of the favourites to go down, and a lot of money has been bet this way.

But is a Bundesliga home win as the bookies think?

Mönchengladbach are in frankly terrible form, finding themselves in the bottom four having picked up just one point from three matches. And this is not a blip. They came into this season on the back of five victories in their last 19 Bundesliga outings.

We have long had a soft-spot for Mönchengladbach but we are a bit worried for them at the moment.
Their 2-1 loss to Union Berlin underlined their problem: they want to play football but too often were loose in possession and were punished. Their three opponents so far finished above them in the league last season but this is a match they will know they will be expected to win, which could add pressure.

Don’t get us wrong: Mönchengladbach should win this game, but at odds of 4.55 for a draw when Bielefeld have drawn their last three games looks too good to resist to us.

Getting Bonuses with BetGold and Betting On the Bundesliga

To bet on the Bundesliga this weekend at attractive odds, simply follow our betting tips and claim one of the best betting bonus offers we are offering on this page with a book maker like Merkur or Neo.bet and hopefully place a winning bet.