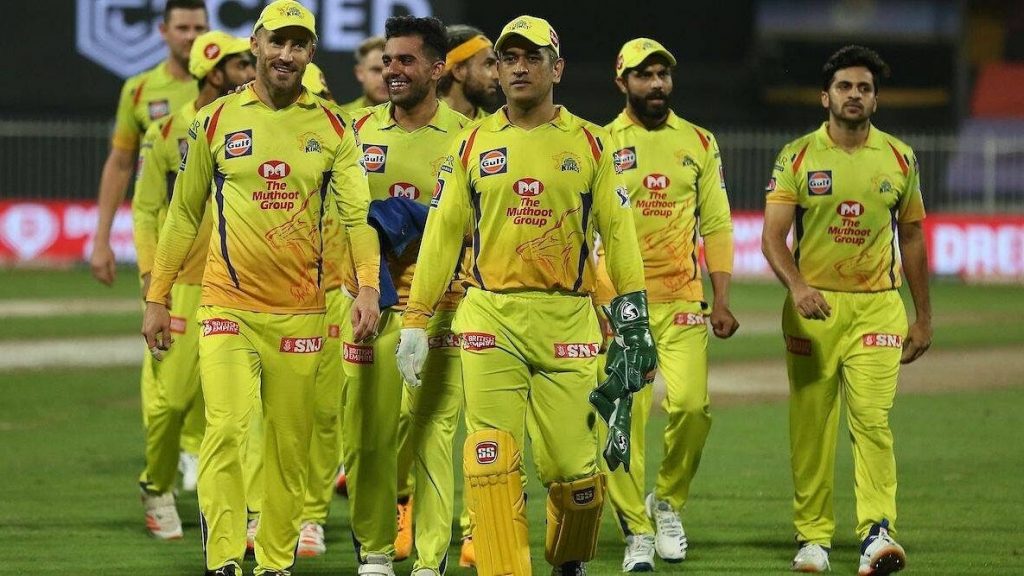 After enduring their worst IPL campaign last year, Chennai Super Kings lifted its 4th IPL crown a week ago on the 15th October 2021. In the final, it came up against a resurgent force in Kolkata Knight Riders, the best team in the UAE leg of this interrupted IPL season. The vastly experienced CSK side, renowned for delivering in big matches, held their nerve in crunch moments to seal a fairly comfortable victory in the end.

In May earlier this year, when IPL ’21 kicked off in India and was played in empty stadiums amidst a devastating pandemic situation, Chennai Super Kings did not make the best of starts. It lost its opening fixture to the Delhi Capitals, a dynamic team that would go on to finish in pole position at the end of the league-stage.

However, making amends immediately, CSK compiled a 5-match winning-streak that moved them to the top of the standings. The bowling-unit was not in great form but the batting-card, with Faf du Plessis in particular, put up some big performances. The South African opener had recorded 4 fifties in a row to become one of the leading run-getters of the IPL at this stage.

IPL 2021 Suspended Because of the Covid-19 Pandemic

The winning run ended in their 7th fixture of the season which proved to be their last game in the country. IPL ‘21 got suspended indefinitely following an outbreak of CoVid-19 cases within the camp of one of the franchises. CSK held 2nd position in the table at the time but had a game in hand over the team in top-spot.

Resumption of the Indian Premier League

Eventually, the announcement regarding the resumption of IPL ’21 came with the tournament to be held 4 and a half later in totally different settings of the UAE. With the new venues also came new faces, replacements for the teams with unavailable players. But CSK is one of the two sides which did not make any changes to the squad.

This undisturbed continuity might be one of the reasons behind CSK’s rapid start to the UAE leg of IPL ’21. It began with 4 straight victories to easily ensure a playoff-spot while looking to consolidate its grip at the top of the league. The bowlers were much more potent as a unit in the 2nd leg even as the young opener Ruturaj Gaikwad came into an outstanding patch of form.

Gaikwad notched his maiden IPL hundred in the 5th match of the UAE leg, an unbeaten knock of 101 against Royal Challengers Bangalore. However, CSK ended up on the losing side in this encounter, which was the first of 3 defeats in a row for the champions. It meant that CSK finished in 2nd spot behind Delhi Capitals whom they would face in Qualifier 1 nevertheless.

Once in the playoffs though, CSK held the upper hand over the Capitals owing to their previous experiences in the business-end of an IPL. The team from Delhi was searching for its first IPL victory after falling at the final hurdle last season. On the other hand, Chennai was making its 9th appearance in the playoffs having won the title on 3 previous occasions.

Even then, Delhi Capitals gave a strong account of themselves with half-centuries from Prithvi Shaw and Rishabh Pant to post a formidable target of 173. Robin Uthappa led the charge for CSK with a wonderful knock and Ruturaj Gaikwad posted another fifty until a spate of wickets brought about a close finish. Eventually, some late heroics from an out of form MS Dhoni were required to drive his team to yet another IPL final.

Kolkata Knight Riders joined them a few days later; the team with the best record since the tournament resumed in the UAE. It had a miserable first half to the campaign and was languishing at the bottom-end of the table with barely a prayer of reaching the playoffs. Yet with some crucial additions to the squad, KKR bagged 5 wins from 7 league-matches in the Middle East to nick 4th spot. It then dispatched RCB and Delhi Capitals in the knockout-rounds for its first IPL final since winning the trophy 7 years ago.

In the championship clash at the Dubai International Stadium, KKR won the toss and asked the opposition to post a target. CSK responded in fine fashion with superb performances from their top-order. Faf du Plessis got 86 runs in his 100th and possibly last IPL match for the side. KKR started the chase well with fifties from both openers Shubhman Gill and Venkatesh Iyer. But the middle-order collapsed without any resistance as the pressure mounted and it ultimately ended in a handsome CSK victory.

Chennai Super Kings were the bookies’ favourite for the title this year and it managed to earnestly live up to its billing. Led by MS Dhoni, who might take this title as his swansong, the core of this team is mostly the same group of hardened veterans that triumphed 3 years ago. Faf du Plessis, Dwayne Bravo, Ravindra Jadeja and Shardul Thakur all played massive roles on this glory road. The youngster Ruturaj Gaikwad eventually picked up the Orange Cap by a 2-run margin over his opening-partner, and his emergence as a legitimate IPL superstar in the years to come is the cherry on the cake.

Hope you placed your bets on Chennai Super Kings this year. Now it’s time to follow the T20 World Cup betting predictions, which you can do here