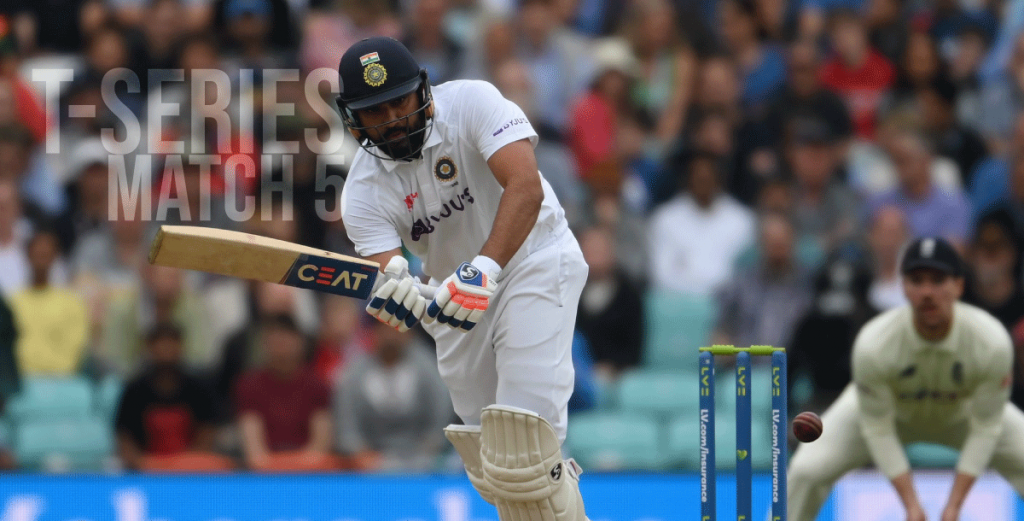 A scintillating comeback, capped by an enthralling bowling performance on the final day of the 4th Test has handed India a 1-2 lead in the India vs England 2021 T-Series. All as BetGold predicted when most bookmakers were favouring England. Thank you customers for all your emails and glad you won big!
In a contest that was a microcosm of this series, the pendulum swung heavily in favour of England before the visiting side clawed its way back to a magnificent victory that will remain long in Indian hearts.

Old Trafford, Manchester will be the setting for the final showdown between the two teams. England has 10 wins from the last 12 Test matches at this venue, while India has never tasted victory in 9 prior visits to this ground which include 4 defeats. A thrilling game of cricket awaits us!

Owing to their player-rotation policy among other reasons, England has not named an unchanged side in this series and that trend is set to continue.

Rory Burns and Haseeb Hameed will resume as the opening-partnership with both batsmen getting a fifty each in 2nd innings of the 4th Test. Dawid Malan has looked in good touch as well and his run-out dismissal was a pivotal moment in the context of the game.

Skipper Joe Root has got over 500 runs in the series and will be eyeing another big one after failing to get a fifty in the last match. Ollie Pope was the top-scorer in the 1st innings so he is likely to retain his spot in the side while Jonny Bairstow should get the nod over Jos Buttler as the wicketkeeper of the team.

Chris Woakes was England’s best player of the match on his return from injury scoring a half-century in addition to his 7 wickets. James Anderson only picked up 2 wickets in the last match and he has not enjoyed much success at Old Trafford in recent years.

Ollie Robinson bagged 5 dismissals in the game but looked fatigued with both the seamers clocking more than 160 overs in the series. Craig Overton looks doubtful after taking a knock on his elbow, handing a swift return to the team for Sam Curran. Moeen Ali may be retained as the lone spinner although he has not made much of an impact with either bat or ball.

Despite all the available talent, India may retain the same set of players for the 5th Test unless the conditions allow the inclusion of another spinner – why change a winning team when the odds are starting to go your way?

Rohit Sharma scored a brilliant hundred at The Oval to set the platform for a commanding 2nd innings lead and alongside KL Rahul, he is the only other Indian batsman to reach three-figures on this tour. Cheteshwar Pujara has rediscovered his form with a couple of fifties in the last 2 Tests; likewise for Virat Kohli who looks determined to break his extended century-drought.

With the likes of Mayank Agarwal and Suryakumar Yadav waiting in the wings, Ajinkya Rahane will have a hard time keeping hold of his spot even though the skipper has robustly backed his deputy in the past. Meanwhile, Rishabh Pant finally notched a fifty to ensure his place behind the stumps.

Jasprit Bumrah produced a game-changing spell on the last day of the 4th Test and it will be hard to rest him after such a performance even though his workload has crossed the 150-over mark. Umesh Yadav was excellent on his first appearance of the series, finishing with 6 wickets to his name.

Perhaps, Mohammed Siraj may be benched for this clash in favour of Mohammed Shami. Unless the pitch-conditions favour playing Ravichandran Ashwin as the second spin-bowler, Shardul Thakur should stay in the side as a fast-bowling all-rounder after scoring two priceless fifties and taking 3 crucial wickets. Quite possibly, Ravindra Jadeja will be the only spinner of the side.

From the outset, this series has been an evenly-matched contest even if there has only been one draw so far. However, the infamous Manchester weather could play a factor in producing a rain-induced stalemate similar to the opening match.

We expect the final test to end in a Draw and India to win the series.