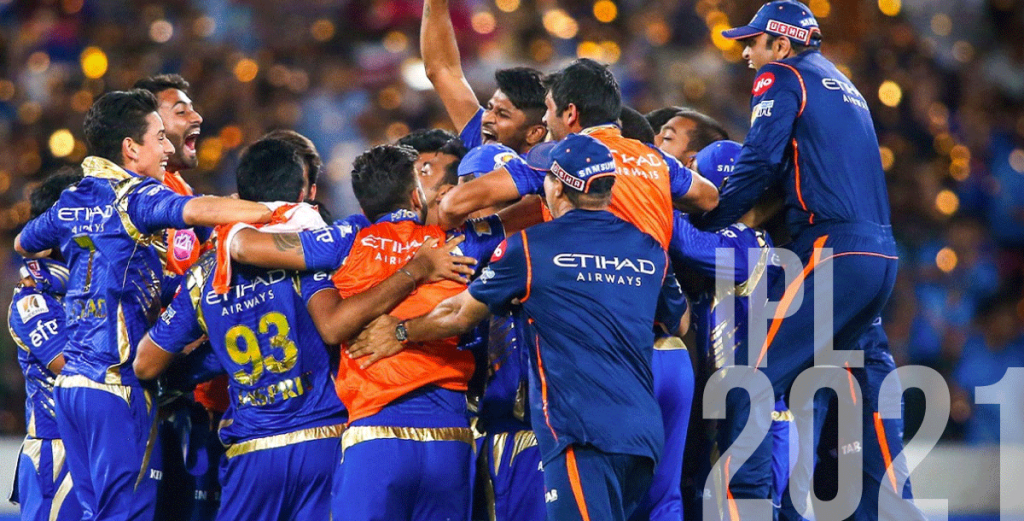 After a 4 and half month long hibernation, IPL 2021 is set to resume from the 19th of September.
The tournament was temporarily suspended last May following a Covid-19 outbreak in the country with the concluding half scheduled to be played out in the United Arab Emirates.

Abu Dhabi, Dubai and Sharjah will host the remaining matches and the change in playing conditions could produce a completely different character to the tournament.

3-time champions Chennai Super Kings are the bookmaker’s favourites for the title with odds of 3.60 on 10Cric. CSK had a poor season last year but is in the title-contention this time after picking 5 wins from their 7 matches.
Delhi Capitals currently head the league-table with its tally of 12 points from 8 matches. Last season’s finalists, the Capitals have grown in stature and are the 2nd favourites with a slightly longer 3.75 price on 10Cric.

Mumbai Indians, the 5-time winners and 2-time defending champions, are next in the outright markets to win IPL 2021. The Indians had a typically slow start but are renowned for getting it right towards the business-end, making them an astute pick at 4.05 on 10Cric.

Royal Challengers Bangalore made a bright start to occupy a top-4 spot with 10 points from 7 matches. Being a mercurial side, RCB could fail to replicate this form and they are available at an odds of 5.50 on DafaBet to win the tournament.

Amongst the outsiders, Rajasthan Royals, available at an odds of 15.00 on DafaBet has coped reasonably well without some key players to stay in 5th spot at the halfway stage but seem a far cry from becoming champions. The same goes for Punjab Kings available at an odds of 17.10 on 10Cric, who are in decent position to finish in the top-4 if teams above them slip up.

Kolkata Knight Riders at 29.00 on DafaBet will hope for a turnaround of fortunes after a dismal first-half but they have the potential within the squad to be the dark-horse for the title. On the other hand, Sunrisers Hyderabad (81.00 on DafaBet) has to win almost all of their remaining matches to have a chance at making the top-4 which is highly unlikely.

IPL Teams To Finish Bottom In The 2021 Season

Having earned just 1 win from the first 7 matches, SRH is the bookies’ favourite at 2.30 to finish at the bottom of the standings even though they have never done it previously.

KKR has picked up only one victory more than SRH and is the next favourite with odds of 3.65, at par with Punjab Kings who have ended outside the top-4 for the past 6 seasons and finished in last position on 2 occasions.
We back KKR to finish bottom this year at 3.65 on 10Cric.

At 3.00 Shikhar Dhawanis the clear favourite with the bookies to finish as the top batsman of IPL 2021. Enjoying a fine run of form this year, Dhawan is currently the highest run-getter of the tournament and will be fresh and rested for the rest of the competition.

Having scored over 300 runs this season, Francois du Plessis is the next in line with a 6.50 price. However, the ex-South African skipper has been a bit inconsistent since the suspension of the tournament.

Prithvi Shaw at 12.20 and Sanju Samson at 13.5 are the outside choices with both batsmen scoring over 250 runs in the tournament so far. Rohit Sharma has been India’s best batsman on the tour of England and with odds of 16.5 he will be an excellent wildcard pick if he carries that form over to the UAE.

We back Shikhar Dhawan to be the Top Tournament Batsman at 3.00 on 10Cric.

Harshal Patel had a spellbinding first half to the season and he is the heavy favourite to be the top bowler of the tournament with a short 2.50 price. The RCB seamer has bagged 17 wickets so far and he might be quite as effective with his slow deliveries on the dry, sluggish pitches in the UAE.

With 14 dismissals each, Delhi Capitals’ Avesh Khan and Rajasthan Royals’ Chris Morris are the next two fast-bowlers in line at odds of 5.50 and 7.05 respectively.

At 14.5, Rahul Chahar and Rashid Khan are the 2 spin-bowlers among the top-5 wicket-takers. These odds may shorten dramatically in due course, for both the spinners are likely to make hay on the slow, turning pitches of the Emirates.

We back Harshal Patel to be the Top Tournament Bowler at 2.50 on 10Cric.

Delhi Capitals has been one of the most consistent sides over the past couple of seasons, making steady progress under coach Ricky Ponting. After reaching their maiden IPL final last year, the Capitals may get their hands on the trophy at long last at 3.75 on 10Cric.

If you enjoyed this Indian Premier League 2021 Betting Guide, then keep track of the latest Cricket News here at BetGold with the best betting tips and predictions.