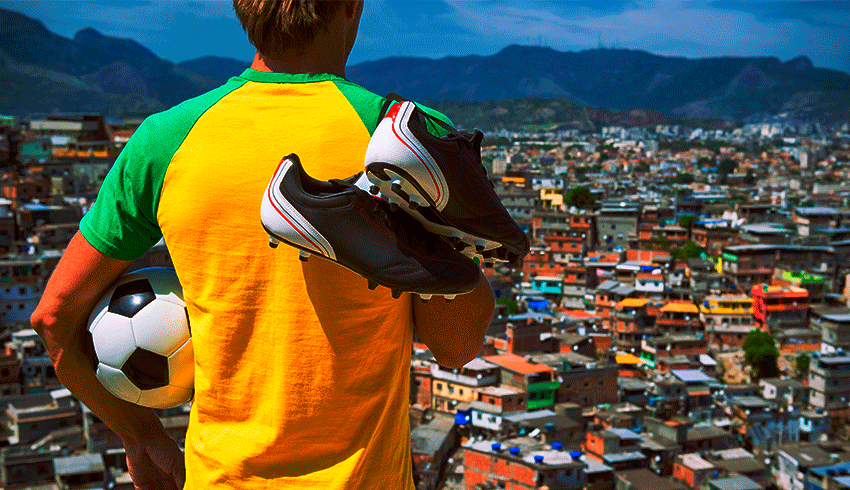 There have been a number of incredible young talents to have come from South America in regards to the sport of football, with some of the world’s best players having been produced by the south american continent. History has been littered with great football names throughout the years and the future certainly appears to look rather bright as there are a number of talented wonderkids to be coming through the ranks once again.

Brazilian football club Santos have produced a number of top young talents over the years, with football players such as Robinho, Diego, Neymar and Rodrygo to name a few south american  wonderkids and it seems they have another exciting prospect on their hands.

Brazilian Sandry is an 18-year-old defensive midfielder that has plenty of versatility and a number of exceptional attributes that make him a truly exciting southamerican young football talent. For example, the south american young talent is brilliant when in possession of the football, whilst his teamwork and consistency make him an excellent prospect.

Sandry is not the only young talented player currently coming through the academy ranks at Santos that can be described as a wonderkid. Renyer is a brazilian left winger who has top acceleration and pace, thus making him a real threat when on the attack.

The 17-year-old south american wonderkid is considered to be one of the best young football talents to have emerged from the club’s academy since Rodrygo, as his ability in front of goal looks to have the potential of making him one of the best in football when he matures.

Flamengo’s Lázaro is another one of the most exciting young talents to be emerging from the south american football being played in Brazil, with the brazilian attacking midfielder standing out for his ability to dribble with the ball, the flair the wonderkid has whilst on the pitch and his ability to be rather versatile in the final third of the pitch. Definitely a young talent to keep an eye on in the near future.

São Paulo have managed to produce their own wonderkids over the years and the brazilian Brenner is set to be the next one to come off the production line that the club have been churning out. The south american is a typical striker that has the ability to dribble the ball in one-on-one situations effectively, whilst also being able to find the back of the net.

The 20-year-old’s south american football player’s speed and technique sets him apart from many of the other young talents in football, whilst he has a football brain as his intelligence makes him incredibly dangerous.

The brazilian young talent Gabriel Menino can play in a wide range of different positions, thus making him incredibly versatile and one that Palmeiras will be raving over. Playing as either a full-back or in the midfield, the south american wonderkid provides his football team with a number of options in which they can take full advantage of the pace he has to offer.

The son of former Colombia international forward, Juan Pablo Ángel, Tomás Ángel is a truly exciting young football player that has a promising future ahead of him. A forward himself, the south american 17-year-old attacker has shown that he boasts some exquisite technique and has a shot that many strikers would love to have in their locker.

Bruno Gonçalves Is One Of The Top Southamerican Football Wonderkid

The brazilian Bruno Gonçalves is widely believed to be the best football player in Brazil to have been born in the year of 2003 and it is not hard to understand why. The Red Bull Bragantino young football talent possesses a great mix of speed and technical ability and showcased that when he managed to dribble the ball past five players before putting it in the back of the net. The south american forward could go far in the game if he lives up to the wonderkid label.

Estudiantes have one of the best young talents to have emerged from the sport of football in Argentina for a long time in Darío Sarmiento. The Argentinian young football talent has already shown he can be versatile as he moved from a No10 position to the right wing and has a wonder of a left-foot. The south american wonderkid has already been linked with a move to Manchester City, which perhaps speaks for itself.

Ecuador have produced some wonderkids in the past and Anthony Valencia looks to be one of the best young football talents to emerge from the country recently. The south american  left-footed winger, he will generally be deployed on the right which enables him to cut in on the inside of the pitch and get a strike away. The south american wonderkid is incredibly comfortable in one-on-one situations, whilst his explosive pace makes him incredibly dangerous.

Although not currently based with a football team in South America, Juan Ignacio Cabrera is an attacking midfielder from Uruguay that has every chance of becoming a wonderkid. The 17-year-old south american wonderkid has excellent movement and a brilliant eye for passing and has since been compared to fellow compatriot, Federico Valverde, in the past in regards to his playing style.